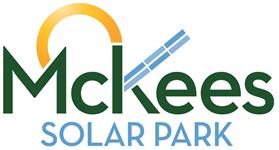 McKees Solar Park McKees Solar Park is a 3.91-acre former municipal landfill and brownfield site off East Cleveland Avenue, which was redeveloped for the purpose of creating a 230-kilowatt solar farm using funds from Newark’s Green Energy Program and donations from residents in the community. This behind-the-meter, renewable power source serves all residents by reducing the City’s peak power demand, lowering the wholesale cost of power, generating solar renewable energy credits, bringing locally produced green energy to the City’s electric users, and reducing the City’s carbon footprint. The 900-panel array produces enough electricity to power approximately 26 to 36 homes, depending on the season.  The project, which was supported by Newark’s Conservation Advisory Commission and the public, was initially approved by City Council in 2012. Following construction of the park, official operations began in October 2014. Since then, McKees has functioned on a consistent basis.


For every 1,000 kWh produced by McKees, the City generates one Solar Renewable Energy Credit (SREC) that it sells to the Delaware Municipal Electric Corporation for $50. Since McKees went online, the City has received $49,000 for the SRECs generated by the solar park while bringing a 50 year old brownfield back to usefulness. In addition, McKees has received another $10,070 in donations from our solar-conscious community. In total, the City has accumulated $97,107 for future green energy community projects as of January 31, 2018. Going forward, the City is able to use the McKees Solar Park as a means to assist in the funding of future community green energy projects through the sale of SRECs. Residents and businesses alike will benefit from this project for many years to come.


City Council initially approved the project in 2012, but more recently, City leadership supported efforts of Newark’s Conservation Advisory Commission to include public participation in the funding process. Residents and businesses will be able to share in the park’s success by making a tax-deductible donation representing the cost of a panel or a partial panel by completing an online donation / investment form here and clicking 'Submit Form' at the end of the document. A version for print is available here and can be submitted at City Hall, 220 South Main Street, Newark, DE 19711.

All who have donated to the McKees Solar Park will be recognized here!


In addition to an outright donation, residential electric users will have the opportunity to make a one-time investment of $50 in return for a $0.01 per kWh rebate on one (1) 100 kilowatt-hour block of power generated from McKees Solar Park per month, which will displace the first 100 kwh of household consumption. All usage will be billed at prevailing retail rates, less the $1.00 monthly rebate for the 100-kwh solar block. This investment option expires after ten years and is available on a first-come, first-served basis. Please review the signup form for additional details. Once the McKees Solar Park is fully subscribed, the City will resume efforts to offer green energy on a premium subscription basis backed by renewable power generated outside of Newark.
Report a Concern
Employment
inform me
Payments & Utility Services
Forms & Applications
Get News
City Maps
CORONAVIRUS